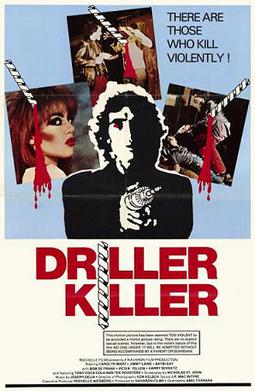 What if Taxi Driver had been directed by Kenneth Anger? What would a post-punk No Wave horror film look like? Look no further than Abel Ferrara’s 1979 masterpiece and directorial debut The Driller Killer.

Ferrara is a veteran New York filmmaker, known for classic 90s films like King of New York and Bad Lieutenant. But before that, he was making gritty gems of the sort that MSC lives for. 1984’s Fear City and 1987’s China Girl will both have reviews forthcoming.

The Driller Killer is about an artist who turns into a psycho killer. He lives in a cheap loft somewhere in the city, back when the city still had cheap lofts that artists could rent. A No Wave band moves in next door and practices constantly. On top of that, our struggling artist has girl problems, money problems, and gallery owner problems, all of which are enough to make a man want to start committing random murders with a power drill.

Ferrara does a great job of showcasing the driller killer’s gradual descent into murderous insanity, his process of becoming-driller-killer. It starts with some uncomfortable flashes in his mind, his face covered in his victims’ blood, the temptation to kill with the drill. Along the way, we’re treated to some glorious scenes of late 70s NYC, including a nice shot of Max’s Kansas City at the film’s beginning. Virtually every scene takes place at night, and you get the feeling that this is exactly what night life was like at that place in time – minus the psycho with the drill.

As a bonus, we’re treated to an explanation of how the driller killer is able to kill with the drill in the days before battery packs allowed for portable power tools: the driller killer sees a commercial for a portable power supply (Porto-Pak! Only $19.95! Available at Macy’s, Gimbel’s, and any participating hardware store near you!), which gives him the Eureka moment of realizing how he can become a mobile drilling killing machine.

Driller Killer quickly reminded me of Daniel Clowes’ Art School Confidential, and I wouldn’t be surprised if it was an inspiration for it. Some of the close-ups and the shaky, vertiginous hand-held camera shots bring to mind Kenneth Anger’s occult films of the 1960s.

But more than either of those, Driller Killer seems to me a worthy successor, in a way, to Ray Dennis Steckler’s immortal 1964 Eastmancolor classic The Incredibly Strange Creatures Who Stopped Living and Became Mixed-Up Zombies. Like Steckler, Ferrara both directs and stars in the film. And like Creatures, the film stock of Driller Killer is an irreplaceable aspect of the viewing experience: grainy, dark, and cheap, just like New York in the 70s.

Driller Killer inexplicably fell into the public domain, and is therefore available free online. There two different DVD releases worth getting, though. The Blu-Ray from Arrow Video comes as a two-disc set with new commentary by Abel Ferrara and his full-length 2010 documentary Mulberry St., about his home neighborhood in New York’s Little Italy.

There is also the two-disc set from Cult Epics, which includes The Early Short Films of Abel Ferrara from the 1970s on the second disc.

But you can also watch Driller Killer for free, right here at Mean Street Cinema.