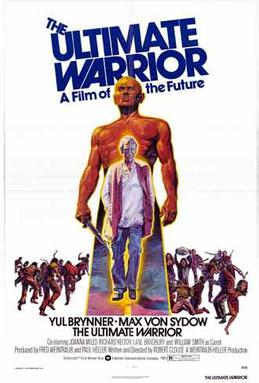 As a kid religiously devoted to late-night regional UHF movie marathons, I grew up believing that post-apocalyptic New York would be a pretty cool place to live:  chain fights (Streets of Fire), talking simians (Planet of the Apes, Beneath the Planet of the Apes) radioactive weed (Class of Nuke ‘Em High) and a shit-ton of motorcycles (1990: The Bronx Warriors) all led me to welcome the coming nuclear Armageddon that would usher in the era of mutated madness.  Obviously the lack of decent food and sporadic accessibility to drinking water weren’t cool, but in my pre-pubescent mind, the fun and action outweighed the grind of maintaining the daily mundane pre-apocalypse lifestyle.  Oh, and the chicks were all hot and wild (as if the imminent nuclear fallout that triggers all these films had somehow turned all women under the age of 30 into Dokken video extras).

Such were the rose-colored spectacles of youth.  Now that I am getting older, my conception of what the world will look like when we do run out of gas, water, ozone, breed-able women, common sense, honey bees, etc., trends more towards the Thomas Hobbes variety (“nasty, brutish and short”).  As such, it probably won’t be the Technicolor, bandana brilliance of those roving wasteland gangs of my youth.  I now very much doubt that there will be ex-professional wrestlers with crossbows hunting frog/human hybrids (Hell Comes to Frogtown), or leather clad mercenary avengers stalking drug addicted androids between sex romps with blondes in leotards (Mutant Hunt).  Sadly, the 1980s version of the World’s End probably won’t be the actual reality.  The hues will be subdued, the Mohawks tamed and there probably won’t be any exciting transportation options.

The essence of what that time (when it comes, and it is coming…) will most likely resemble is made manifest in writer/director Robert Clouse’s 1975 film The Ultimate Warrior.  NYC in the year 2012 is a very vacant place.  After the obligatory holocaust, PLAGUE has eradicated mankind, leaving pockets of city dwellers to fight amongst themselves for the meager scraps available.  Clouse keeps his frame tight, trained on Midtown East, where we first see (a shirtless!!!) Yule Brynner (Carson) standing in front of the Public Library meditating motionless for days.  Max von Sydow (The Baron), a somewhat benevolent leader of a fortified dwelling on what appears to be 5th Ave and 40th street, notices Brynner’s physicality AND enlightened approach, so juxtaposed with the feral street rabble that assaults his fortified abode on a daily basis.  The Baron invites Carson to join his society and it is from their interactions that we learn of the existential threat to the newly developed Social Order:  A huge barrel-chested dude named Carrot – played by William Smith – who looks to be the love child of Ted “Million Dollar Man” Dibiase and Non, the mute retard hulk who’s General Zod’s muscle in Superman II (Incidentally, Smith also was Conan’s dad in the beginning of Conan: The Barbarian as well as the evil bike-gang leader in the best Gary Busey movie you’ve never seen, Eye of the Tiger).  Carrot’s gang does what every “bad” gang always does: knocks over people, sets fire to stuff that isn’t theirs and steals everything in sight.  They up the ante by killing a newborn baby (and its parents) in a food pantry raid, so you know these guys are no joke Future Evil.

The portrayal of this type of desperate existence is enhanced by the muted gray/brown hues of the people and the nervous actions of those still existing in an irradiated Big Apple.  It’s not over-the-top madness, but rather a subdued panic over where the next meal is going to come from.  The City is almost medieval in its interactions and technology (chain-pulled doors, cages for evil-doers).  The society that The Baron has established makes all others on the outside envious (think East New Yorkers in relation to Grammercy Park), and it is from this place of “Haves” and “Have Nots” that the conflict arises.  It’s the perfect metaphor for surviving NYC or making it BIG in the hip-hop game.  Jealousy, envy, desire for status… there doesn’t need to be a nuclear war to understand these motives.  Carrot wants in and if he can’t get in, he’ll destroy it from the outside.  But the Baron has his internal problems.  The jealousy from within caused by his elevated status leads to some rough justice.  He needs to keep order in his house and when you go too far, you get excommunicated (“Give him to the Street People”).  It’s a tough balancing act, but one he needs to play a while longer as his daughter Melinda is pregnant.  The father is the Baron’s best scientist, who has developed plague resistant seeds that have the potential to change the food situation for everyone.  Of course before that can happen, Carrot breaks in, kills Melinda’s baby-daddy and brings an end to the Baron’s idyllic West-Side sanctuary.  Carson is now charged to get Melinda to the safety of some coastal Carolina island (why so far away??) where she can give birth to human life AND re-seed the world with her dead lover’s magic beans.  The metaphor is thick, but it is an effective premise from which we are allowed to bear witness to Carson kicking all kinds of street gang ass en route to the Tar Heel State.  Safe to assume, the climactic Carson/Carrot fight is pretty epic and the build-up to it is worth the $7.99 you’ll spend on the DVD.  Please note, this is how the end of the world will look – Not with a flame-throwing Biker Gang, but with Yule Brynner planting tomatoes on the beach after giving battle on an abandoned N Train.  Believe it.