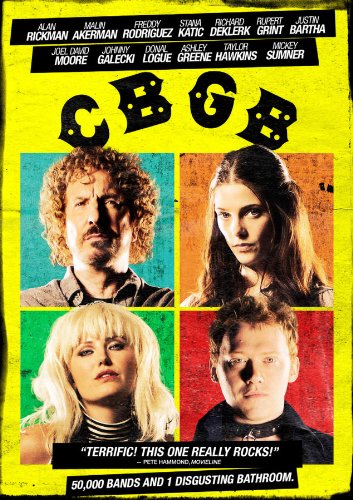 I really wanted to hate this film. I was quite sure that I would. First, the poster makes it look like some teeny-bopper upbeat comedy. And it kind of is. Second, it became obvious within the first five minutes of the film that the filmmakers know nothing about how to make contemporary New York look like 1970s New York. I guess I can’t entirely blame them since Mean Street Cinema was not yet around yet to serve as their guiding light and darkness in this area. But still, they could have watched and learned from Spike Lee’s Summer of Sam, which did a far better job of giving off that gritty 70s feeling.

It’s interesting to compare how different films have dealt with this problem of re-creating the past in the present. We already addressed how Julian Schnabel’s grunge-and-angst 90s NYC utterly failed to represent 80s grime-and-crime NYC. An upcoming review will discuss the novel approach of The Basketball Diaries and how its strange mix of mid-60s and mid-90s creates a netherworld all its own. (UPDATE: Review here.)

But in spite of my initial misgivings, I ended up kind of liking this film. Kind of.

First off, I’m a die-hard Alan Rickman fan, by which I mean I’m a Die Hard Alan Rickman fan since his portrayal of terrorist-thief Hans Gruber in that film is one of the greatest of all time. Here he plays Hilly Kristal, proprietor of CBGB and celebrated in the film as the curator of American punk rock. One might take issue with a film on the CBGB scene – the only one to date – focusing more on Hilly than on the bands themselves, but it does personalize the story and allow for an arc that might not otherwise be available for a plot. Also, the bands themselves have paid tribute to Hilly and credited him with providing the space that made their musical movement possible – the end credits of the film feature a nice clip of Talking Heads bringing Hilly up on stage during their induction into the Rock N’ Roll Hall of Fame.

As for the bands, some are dealt with nicely, some are glossed over, and others are ignored altogether. The most criminal omission was Johnny Thunders and the Heartbreakers. Any discussion of NYC punk rock has to talk about the New York Dolls, Johnny’s first band, and the Heartbreakers, not only because they were Johnny’s next band but also because they were Richard Hell’s next band after he left Television. The film does feature a song from the Heartbreakers, and also one from the Dolls, but that’s it. On the other hand, I’m kind of glad the left them out because for years now I’ve been saying they should make a movie about CBGB and have Adrien Brody play Johnny Thunders, but by the time they got around to doing it, he was too old. (It actually wasn’t Brody’s punk rock character in Summer of Sam that gave me this idea, but rather his performance in Love The Hard Way, a superb New York film from 2007.)

Television – the band, not the machine – is featured prominently in the film, which is entirely as it should be since they were the ones that discovered CBGB and first negotiated with Hilly to play there. But the story is very Tom Verlaine-centric – which is perhaps also as it should be – and leaves out the central role that Richard Hell played in shaping the aesthetic of the scene, not to mention that he went on to become a damned good lyricist and writer. In my imaginary, alternate, Johnny Thunders-centric version of the film, the drama between Verlaine and Hell which eventually leads to their split which leads to Hell joining the Heartbreakers which formed from the split of the New York Dolls and then Hell leaving again and forming the Voidoids – would have formed a major part of the story. That and Debbie Harry being really hot. This film has the latter but not the former.

As for the other early CBGB bands, if you want to see who else is there, see the film, and if you want to know who else was there, read the book that the film seems to have used as its main source, Gillian McCain and Legs McNeil’s Please Kill Me. McNeil is another hero of the film, since he was the creator of Punk magazine, which promoted all these bands and the whole scene and helped to propel it to nationwide recognition.

One of the things the film portrays well, albeit it inadvertently, is the way that punk rock, far from being a totally organic and anti-establishment thing, was the result of an orchestrated media campaign that aggressively promoted it.As William Burroughs – himself hailed as the “Godfather of Punk” – said at the time, “I think the so-called punk movement is indeed a media creation.” The film shows how Village Voice articles brought attention to the club, how other media celebrities were soon to be seen there, and how the record labels latched onto the bands. I’m not saying CBGB was totally put together by ad men like The Monkees or Milli Vanilli – but it takes more than raw talent (or raw power, as Iggy would say) to make a scene that makes the history books.

Which brings me back to wanting to hate this film. I hate it when mainstream pop culture pays tribute to the very people and movements that rebelled against it years before. It’s such an obvious example of what Guy Debord and the Situationists (that’s a philosopher and his political group, not a singer and his band – or is it?) – said always happens when the spectacle of culture is just another commodity in a capitalist economy. On the other hand, what if those revolutionaries were always just wanna-be celebrities in the first place? Maybe Che Guevara’s secret dream was never a communist utopia so much as becoming his own brand. (And why isn’t there a conspiracy theory about him faking his own death like Elvis and secretly orchestrating this global media campaign to put his ugly mug on every commodity known to man?)

My favorite book on the CBGB scene is not Please Kill Me (named after a t-shirt that Richard Hell made and used to wear in the club, until something happened which is portrayed in the film) but Clinton Heylin’s From the Velvets to the Voidoids. For me, the reason some of this music is still relevant is not because it was yet another vapid youth subculture, but because some of it is truly great art. Heylin’s book does a better job of focusing on the artistic aspect of the scene – including great info on unsung tragic hero Peter Laughner – rather than focusing on the more salacious aspects of it like McNeil’s book.

The film takes its cue from McNeil and not Heylin, which is perhaps justified since McNeil was there as a participant and Heylin was a later chronicler. But I think the real reason was that the producers figured a story with noise and drugs and endless references to how filthy the CBGB bathroom was would sell better with a younger audience. And that’s generally true, except here we’re dealing with a subject which will mainly appeal to older people who were influenced by it in their youth and now have some nostalgia for it. I’ll never understand why Hollywood always takes this approach of trying to “update” old franchises or subjects for a newer audience, rather than just giving us old fogies a little more of what we loved about it in the first place. (Ya heard me Spielberg? That last Indiana Jones movie was utter shit.)

I wanted to hate this film, and I thought it would be utter shit. But since I had a bad attitude and no expectations of anything good, I ended up having a good time in spite of myself. I think that’s kind of punk rock. Kind of.