It’s an open secret amongst Mean Streeters that Joey Mook is a big fan of The Joel, and has been since the days of the double LP Greatest Hits. I was recently pleased to learn that I’m in good company, as Gene Ween recently did an entire tour on the east coast playing nothing but Joel covers.

Think of NYC circa ’76/’77 and it brings to mind maybe the Talking Heads at CBGB or Andy Warhol and Mick Jagger doing coke off the table at Max’s Kansas City. But topping the charts at that time were not the scrawny punks of the Bowery or the has-been artistes of the previous decade, but a nice little Jewish boy from the Bronx. The Joel dropped what for my money are his two greatest albums in those years, Turnstiles and The Stranger. 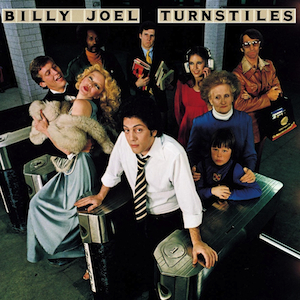 In ’73, Martin Scorsese reinvented the film intro with his use of The Ronettes’ “Be My Baby” during the opening credits of Mean Streets. (Hey, that’s a good name …) Turnstiles opens up with an homage to that song, and just maybe that film as well, as “Say Goodbye to Hollywood” kicks off with the exact same drumbeat. The title of the song says it all: Piss off, California – I’m in a New York State of Mind. Two decades before Biggie and Tupac, it was The Joel who started the East Coast / West Coast feud. Even the album’s cover art is all about the street characters of NYC, grouped together at the subway turnstile. (Is that Donald and Ivana Trump? Or Tom Verlaine and Debbie Harry?) Turnstiles? Whadda you know about turnstiles, California?

“New York State of Mind” has The Joel “takin’ a Greyhound on the Hudson River Line,” coming back home after having lived in Los Angeles for the previous three years. This was peak decay era, when everyone thought the City was finished. President Ford to City: Drop Dead, as the New York Post reported. The Joel’s response? “If New York’s going to go down the tubes, I’m going back to New York.” And write a soft sci-fi ballad about it. “Miami 2017 (Seen the Lights Go Out on Broadway)” is all about the future fall of the Big Apple. I fully expect a concert extravaganza in Miami Beach this New Year’s Eve, just so The Joel can play this song. 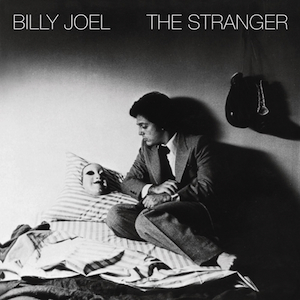 But instead of coming back to a New York going down the tubes, he found a city in the midst of a burst of cultural creativity that it hasn’t seen since. So barely a year later, he drops The Stranger, widely regarded as his magnum opus. The cover art features The Joel looking like a cross between Harvey Keitel in Mean Streets and Rocky Balboa. Virtually every song on the album is about New York in one way or another. And those that aren’t are the kind of slow love songs that every singer knows he has to write so he can score with more chicks. In The Joel’s case, it landed him Christie Brinkley, hottest woman of the early 80s. But I’m not demeaning the songs as insincere or bad songs – your dad probably listened to “Just the Way You Are” and “She’s Always A Woman” and thought of your mom.

“Movin Out” and “Only the Good Die Young” are street songs, about working class kids in the city. “Scenes from an Italian Restaurant,” at least the first part of it, could be the soundtrack to Woody Allen’s Manhattan. Or rather, Allen should have just cut his movie down to a few minutes of usable footage and made a great video for a great song, instead of making a full-length film about neurotic bourgeois bohemians.

I’ve always thought that Billy Joel is a good lyricist, under-appreciated because he writes pop music. The album’s title track, “The Stranger,” evokes an aura of decadence and mystery, exactly the sort of feeling I imagine existed in many of New York’s various scenes at that time. It’s about what Carl Jung called The Shadow – the part of the human personality that most people don’t allow themselves to be conscious of. Spike Lee’s awesome film about NY77, Summer of Sam, (review coming soon) is basically a portrait of this same feeling of decadent excess, but at a citywide level.

Most of the music that New York in the 70s is remembered for creating was only listened to by small subcultures at the time – punk rock, hip hop, new wave. But Billy Joel was topping the charts. To me, this is the sound not just of one little neighborhood or scene, but somehow of the whole city.

Check out this video of The Joel playing “New York State of Mind” probably in ’76 or ’77. As one YouTube commenter put it:

1. Try to look as cool as Billy Joel in this video.